The Girl Who Drank the Moon by Barnhill

In this beautifully-rendered fairytale, we find a people oppressed at the hands of a few greedy government officials, who care only about their own comfort and luxury, that they’ve spun legend into truth, scaring the townspeople into believing in an evil witch who lurks in the forest. The Protectorate—the town—is safe, and the Council of Elders will protect the townspeople from the horrors of the witch, if only they obey the Council, working for pennies, living hungry and sad lives, and harvesting the Bog, which the Council owns. Moreover, the town is required to offer a sacrifice to the evil witch—once per year. This sacrifice is the youngest child in the Protectorate. It is to be delivered to the woods where the evil witch will take it and do as she pleases with it.

The Council, of course, knows there is no witch, and perpetuates this old myth from hundreds of years ago, to keep the town compliant and obedient. They know the baby they deliver each year will be eaten by wild animals or die of exposure. It’s gruesome, and selfish beyond measure, that these men are able to live with themselves, knowing this.

But alas, they are wrong. There is, in fact, a witch in the woods. She, named Xan, is not evil, however. She is a kind witch and feels terribly for these infants who are placed in the woods, so each year she makes a trip to the forest and saves the baby. She feeds each a dose of sunlight, and then takes the baby to the “free cities” where Xan is welcomed and each baby is wanted and a family is waiting.

One year, Xan saves a baby who has a crescent moon birthmark on her forehead, and this baby so delights Xan that she spends extra time with her. Day grows dark, and instead of feeding her sunlight, she feeds her moonlight (a much more potent substance). She drinks and drinks, and suddenly Xan realizes what has happened. She has “enmagiced” the child, and no human family could raise a child who has magic. So Xan keeps her for herself, and raises her in the woods with her family which includes Glerk, the swamp monster, and Fyrian, the dragon. They all grow to love the girl who Xan has named Luna.

But Luna’s magic grows out of control, to the point where Xan cannot reverse the girl’s magic as fast as it comes from her. Xan presses “pause” on Luna (putting her into a cocoon-like state) while she returns to the place where she was raised, a castle once full of wizards and artisans and magicians. We find that Xan was saved by a wizard named Zosimos, who fought against the truly evil witch, and saved the population. Xan realizes she must put a spell on Luna, suspending her magic until she’s able to teach her about it. In doing this, she finds that what happened with Zosimos and herself, will now happen to Luna. The mentor’s magic will transfer to the mentee when she becomes age thirteen, and the mentor will die.

Years pass, Luna’s biological mother-locked in the tower by the evil Sisters (the Council’s soldiers)—grows mad but also magical.

Antain, the clear-headed and morally-correct nephew of the head Elder, knows the sacrifices aren’t right.

The story’s confluence is the meeting of Xan (withering and dying), Luna (looking for answers), the madwoman (finally powerful enough with her magic to break free from the tower), Antain (determined to kill the witch and end the sacrifices), Sister Ignatia (the truly evil witch who is after Antain to kill him so he doesn’t expose the lies of the Council).

The townspeople in the Protectorate have hope after many years of sorrow. Each character comes to terms with his own misunderstandings, with the stories and lies told. Memory is our false narrator as the magic serves to erase thoughts, and brings them back in fractured pieces. And finally, good versus evil. This is a beautiful book with characters to love and hate. 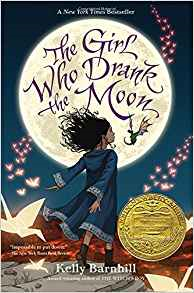