From the Mixed-Up Files of Mrs. Basil E. Frankweiler by Konigsburg

Written in 1967 and recipient of the Newberry medal, From The Mixed-Up Files of Mrs. Basil E. Frankweiler, is a perennial favorite. Claudia Kincaid wants to run away because of the injustices in her home life. She has more chores than her three brothers, and is certain her allowance is less than the going rate. Claudia was made for the finer things in life, and doesn’t want to be uncomfortable while running away, so she chooses to hide out in the Metropolitan Museum of Art. She chooses her brother, Jamie, to accompany her because he is rich, being a penny pincher. With unused bus tickets found in the waste basket, Claudia and Jamie embark on their adventure. They use their violin and trumpet cases as suitcases, hiding clean underwear and a change of clothing. Quickly, they figure out how to of avoid the museum guards, how to feed themselves with vending machine food, and how to sleep on the museum furniture. One day, they observe large crowds around a new exhibit, a twenty-four inch Angel sculpture, rumored to have been sculpted by Michelangelo, though acquired by the museum for only $225. Claudia and Jamie are determined to find out if the carving is a true Michelangelo, or a fraud. They read and research, looking for clues, when they come upon three concentric circles with an M inside, the exact way Michelangelo signed his other works, they are certain this is the real deal. They write a letter to the museum detailing their discovery. The museum responds respectfully, but skeptically, so Claudia and Jamie go straight to the source: the donor of the statue, Mrs. Basil E Frankweiler. At her house, she knows right away these two children are the runaways she read about in the newspaper. She likes that they are resourceful and curious and unwilling to reveal too much about themselves. She tells them the truth, that she is certain the statue is a true Michelangelo, and that she will leave it to the children and her will, if they keep her secret. The children agree, and adopt Mrs. Basil E. Frankweiler as their surrogate grandmother.

At the heart of this book is a girl on a quest to feel different and special. Having a secret makes her different, and when she meets Mrs. Basil E. Frankweiler, the elderly woman affirms this feeling. Having a secret, and most importantly—letting others know that you have a secret—is the exciting part. “Happiness is excitement that has found a settling down place, but there is always a little corner that keeps flapping around.” 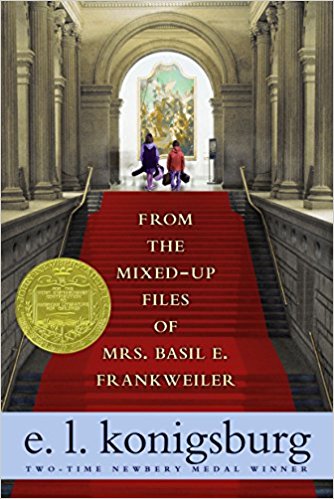