Small Steps: The Year I Got Polio

Peg Kehret is twelve years old when her leg begins to twitch. By nighttime, she is sick with a high fever and aching head to toe. Her parents act quickly, getting her to the hospital where she is diagnosed with polio. Soon she is diagnosed with three types of polio, paralyzed from her neck down, and in jeopardy of not being able to breathe and swallow. Isolated, she is alone and away from her family, as the doctors try to combat the fever. Eventually, thanks to a chocolate milk shake, her fever lessens and Peg improves, learning to swallow, and breathe freely. Once moved to a rehab hospital, she becomes roommates with four other girls who have polio, as well. A sisterhood is formed and the five grow to depend on each other, sharing food, and singing together each night. The readers learn of other patients who spend their lives in iron lungs, respirators that are akin to “being buried alive in a coffin.” We hear of stories of PT and OT, nurses who were mean, and nurses who were saints. We learn of Sister Kenny treatments, originating in Australia and becoming vital to the recovery of polio patients in the U.S. From oxygen tent, to wheelchair, to walking sticks, to walking unaided, Peg takes us on her humble journey. The reader particular appreciates the author’s honest portrayal of her experience. She was a young girl who often felt robbed of her childhood, but also one who matures into a poised woman with a heightened perspective. This easy-to-read memoir is written like fiction, and is hard to put down. 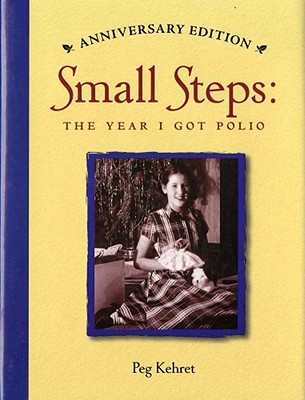