Inside Out and Back Again by Thanhha Lai

Is there a more beautiful book than Inside Out and Back Again by Thanhha Lai? This gorgeous retelling of Ha’s experience as she and her family flee from Vietnam to the United States begins by acquainting the reader with the young girl’s mother and three older brothers. Father is gone, as he was captured by the Communists years earlier. As tensions increase in North Vietnam, the family moves toward Saigon. While conflicted as to whether they should leave, Mother decides it is for the best, even though they worry Father might return to find them gone. The Uncle has found a way for them to flee, and with thousands of others, they cram onto a boat only moments before the Communists move in. Food and water are scarce, as the weeks pass on the boat toward Thailand. Each passenger is given a clump of rice—small, medium, or large—based on their height. Though Ha misses Vietnam terribly, she notes “at least the moon remains unchanged.” Eventually they make it to Guam and to a refugee camp where they are fed food from cans. Ha’s family travels to the States, sponsored by Mr. Johnston, a church-goer in Alabama. Written in verse, this book tells of Ha’s travails, as she is bullied in school, humiliated, called “pancake face.” Ha is even threatened physically, and her brother Vu teaches her self-defense. She learns English; she notes that “whoever invented English must have loved snakes” because of the tricky S sounds. In Vietnam, Ha was very smart. In America, she must re-learn everything, including the alphabet. “So this is what dumb feels like,” she observes. The family experiences closure for Father, who they fear will never return, and hold a mourning ceremony as a way to put the past behind them and move forward. This book is appropriate for fourth graders through adults. It is a seamless read about family, starting over, forgiveness; it is about remembering our first places, and what made those places special. Bookended by Tet (New Year) celebrations, the reader will cherish this book and want to share it. (less) 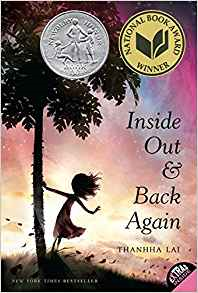